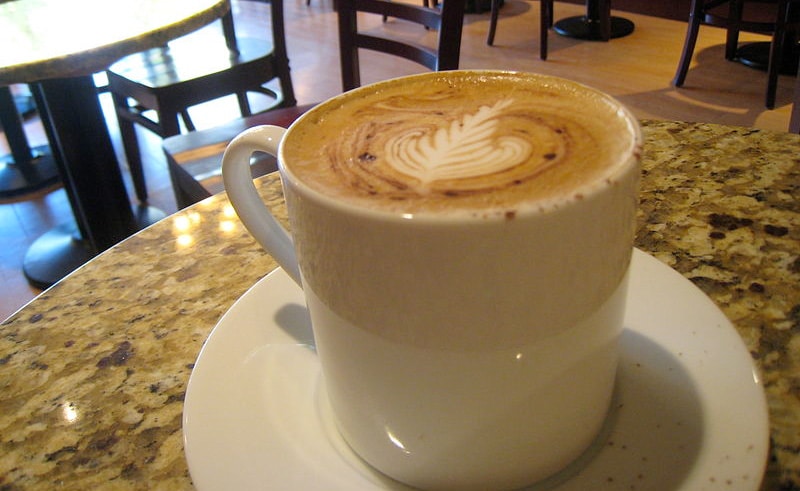 The caffé misto has become a popular mainstay on Starbucks menus everywhere, but you’ve likely seen it offered at a number of other coffee shops across North America (or around the world, if you travel frequently).

Perhaps you’ve even seen others order it.

But even if you’ve had a caffé misto yourself, do you know what it is and where it originated?

Furthermore, how does the caffé misto differ from other coffee drinks that have similar ingredients?

A caffé misto isn’t a complicated coffee beverage by any means, but it is a good idea to know what you’re getting into.

By taking the time now to learn about the drink’s history, design, and purpose, you can order at the coffee shop like a pro and even impress your fellow java aficionados.

About the Caffé Misto

The caffé misto is a rather simple recipe, calling for just equal parts hot, freshly brewed coffee and steamed milk.

The coffee is usually poured first, with the milk added on top (the steaming creates a nice frothed or softly foamy effect).

Just like with a latte or cappuccino, designs are often made into the top of the misto while the milk is poured.

The name “caffé misto” was first popularized by Starbucks, which essentially just renamed the cafe au lait (French for “coffee with cream”).

That said, the drink is served by many coffee shops under a variety of names.

Different coffee shops may also have their own adjustments to the caffé misto recipe.

This is especially true when it comes to added flavorings (like syrups) and milk substitutes.

Origins of the Caffé Misto

Like many great coffee beverage combinations, there’s some mystery as to where the caffé misto originated.

Though Starbucks came up with the name in modern times, “misto” is an Italian word for “mixed.”

So, the beverage name quite literally translates to “mixed coffee,” which obviously makes sense for the combination of coffee and milk.

But as for the cafe au lait’s origins, things are a little less clear.

The name is French, but there is no definitive record as to whether or not the drink was first developed in France.

That said, it may have been around in the country as far back as the 1600s based on references in historical documents.

Others believe the cafe au lait was first created by Dutch traders in China, though the evidence for this also remains shrouded amid unclear records that have lasted over time.

In any case, common milk steaming technology was not developed until the 1800s, so those early drinks were a bit different than the ones your barista whips up every day.

Speaking of steamed coffee technology, it’s also worth noting that while the Starbucks caffé misto contains the same ingredients as the French cafe au lait, the two names are no longer considered interchangeable by some coffee purists.

This is because the misto always features steamed, softly frothed milk whereas the cafe au lait simply calls for warmed milk that may or may not be frothed or even steamed.

Since it has a fancier name than regular coffee with milk or cream, it’s natural to assume that the caffé misto may be wildly different when it comes to flavor.

But whether or not it’s “good” is subjective and depends entirely on personal preferences as well as any tweaks made to the recipe.

In texture, the caffé misto tends to be fuller and creamier than a regular coffee with milk or cream, but it may not have as much actual roast flavor due to having an evenly split coffee and milk ratio.

The texture may feel more or less creamy if milk substitutes (like oat milk, soy milk, almond milk, etc.) are used, or even depending on whether the sipper opts for non-fat milk vs. whole milk.

Both the flavor and intensity of a caffé misto can also be adjusted as desired.

For example, an intense dark roast coffee will naturally provide a bolder drink than a lighter roast.

Likewise, various syrups (like vanilla or hazelnut) may be added for sweetness or simply an extra layer of flavor.

Because they seem so similar in ingredients and design, you may be wondering by now just how a caffé misto differs from a café latte.

After all, the two coffee drinks look very alike with their foam-topped appearances and taste similarly with a blend of roast and milk flavors.

But the key difference here is that whereas the caffé misto calls for coffee, the café latte uses espresso.

A latte also doesn’t offer an even split in its ingredients.

While the misto is 50/50 coffee and steamed milk, the latte is a full shot to two shots of fresh espresso, topped with steamed milk followed by a distinguishable layer of foam.

The misto does have a foamy top, but the foam here is typically lighter and thinner than that of the latte.

Aside from the mild difference in coffee vs. the more intense espresso flavor, however, the two beverages taste quite similarly.

In fact, those looking for a cheaper option to a latte on a Starbucks menu would do well to order the caffé misto, as freshly-brewed coffee comes with a lower price tag than the more time-consuming espresso.

Depending on the exact ratios in each, the misto may offer more caffeine as well.