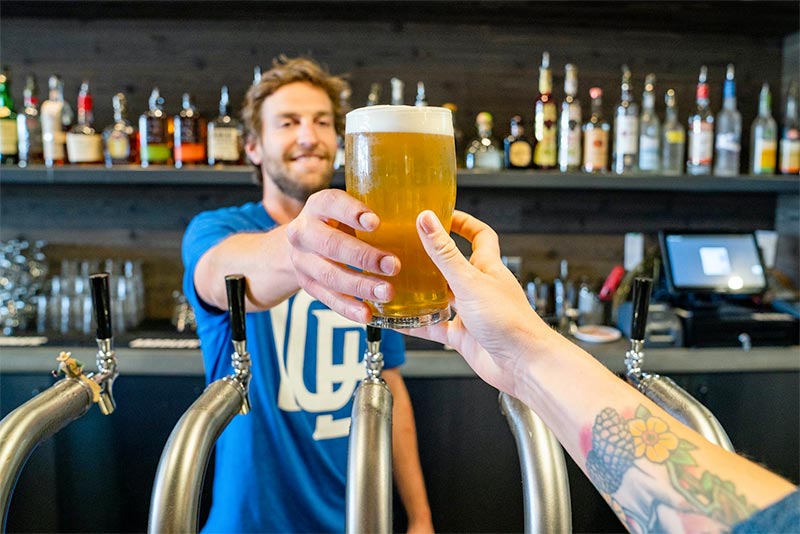 Ever wanted to learn how to pour the perfect pint of beer in your man cave or home bar? If so, you have come to the right place.

Here we will discuss three methods for pouring the perfect pint, including how to pour from a standard tap if you own a home kegerator or have a home bar, a nitro tap and even a bottle of beer.

How to Pour a Perfect Pint from a Standard Tap

The perfect pint of beer is usually poured from a standard tap, and most draft beer kegs usually have high levels of added carbon dioxide.  During the process of tapping draft beer, the keg is generally filled with a fair amount of carbon dioxide.

This is done to help push the beer through the tap lines and to sustain a working level of carbonation once the beer is served.  Because of this, draft beers almost always come with large bubbles and a thin head.

The carbon dioxide levels in draft beers must be dutifully monitored in order to keep the beer from becoming flat and tasteless, or overly foamy and thus difficult to pour and drink.

There are many different types of beer that can be served from a standard tap.  Some of the more common types include pilsners, lagers, ciders, wheat beers and even IPAs—or Indian Pale Ales.  Here is how you would go about pouring the perfect pint from a standard beer tap:

Rinsing your pint glass before you begin to pour a beer can have a few positive effects on that pour.  First, by rinsing your glass you can remove any remaining detergents or other residues from the inside of the glass, ensuring you do not get a soapy taste when you go to drink the beer.

Rinsing your pint glass can also lead to a smoother pour with less foam, and at the end of the pour it helps significantly with head retention and thus the perfect pint.

Start Pouring with a 45-Degree Angle

After rinsing off the pint glass you intend to use you are ready to begin the pour.  Bring the glass up until the spigot of the tap faucet is inside the perimeter of the glass, only not touching said spigot.

Hold your glass at a 45 degree angle to the floor and slowly pull the tap handle forward.  Continue filling the pint glass in this manner until the glass is about halfway full. 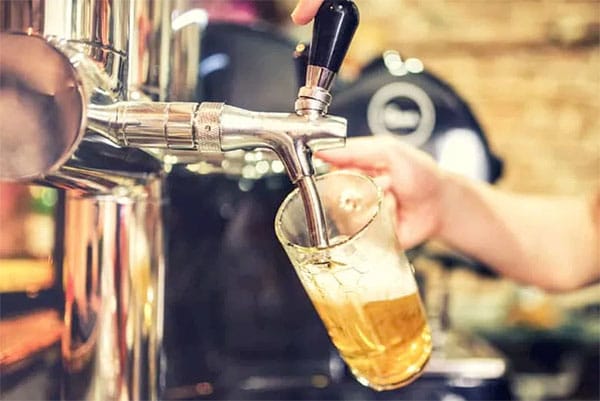 Continue Pouring and Return the Glass to 90 Degrees

Once the glass has been filled about halfway using the 45 degree glass placement technique, return your glass to the straight up and down or vertical position—90 degrees to the floor.

Maintain this pint glass position throughout the remainder of the pour.

When the pint glass is filled nearly to the top with draft beer, push the tap handle back to stop the flow of beer.  By doing this you will leave a bit of room for just under half inch of head, which according to research by St Austell Brewery, is the perfect height.

Before serving this pint, however, you will need to let it settle for about 20-30 seconds.  Simply set the now-filled glass of beer down on a flat surface and wait for the appropriate amount of time.

It is during this time that the carbonation goes to work from the bottom of the glass up.  This means the head on the beer will build as the rest of the beer settles.

Serve and enjoy the perfect pint poured from a standard tap.

How to Pour a Perfect Pint from a Nitro Tap

While most beers utilize a standard tap system that uses only carbon dioxide, nitro beers, as their name suggests, incorporate mostly nitrogen (rather than carbon dioxide) when they are placed into a keg.  Unlike their standard or traditional draft beer counterparts, nitro beers contain about 70 percent nitrogen and only 30 percent carbon dioxide, the latter of which helps to push it through the keg.

Nitrogen is insoluble in liquid.  So what does that mean for nitrogen-based beers?

It means that the head of the beer, as well the way it tastes in the mouth, is much more rich, thick and creamy than beers that use carbon dioxide only. The addition of nitrogen also means that those beers typically have smaller bubbles, which make the carbonic bite and “hoppy” taste that are characteristic of other draft beers relatively nonexistent in the nitro group.

Beers that use a nitro tap are generally much fewer in number than those that use a standard tap.  They usually include some of the darker and thicker beers (think Guinness), such as Stouts and Porters.

Just as you would with the more traditional beer pours, you will need to rinse the glass before pouring a pint of nitrogen based beer.

Again, not only will this help rid the glass of any remaining soap or detergent residue, it will also lead to better head retention once the beer has been poured.

When pouring the perfect pint of nitro beer you are not going to be holding the pint glass throughout the entire process as you did with the standard tap.

Instead, place the glass just below the tap faucet and position it in such a way that the beer will hit directly in the middle of the pint glass.

With the glass positioned just below the tap faucet and exactly centered, you can now pull the tap handle forward and start releasing the beer.  Continue to fill the beer glass until it is filled about two thirds of the way up with the creamy porter or stout.

When it reaches the two thirds mark, push the tap handle back to stop the pour, and wait for a few seconds for the beer to settle.

Now that the glass is filled about two thirds of the way up and the tap faucet is off, take a look at the beer in the glass.  If you watch carefully, you will notice a process called “cascading” going on.

Cascading simply refers to the process in which the bubbles from the top portion of the beer are cascading down to the bottom of the glass.  This is what you want from a nitro type beer.

Once the bubbles have finished cascading (or slowed considerably), pull the tap handle back out and continue your pour.  Just like you did with the standard tap, continue filling the pint glass until it is nearly full—about a half inch from the top.

By stopping the pour right before the beer reaches the top of the glass you are allowing just enough room for the head to develop. Serve and enjoy the perfect pint of beer from a nitro tap.

How to Pour a Perfect Pint from a Bottle of Beer 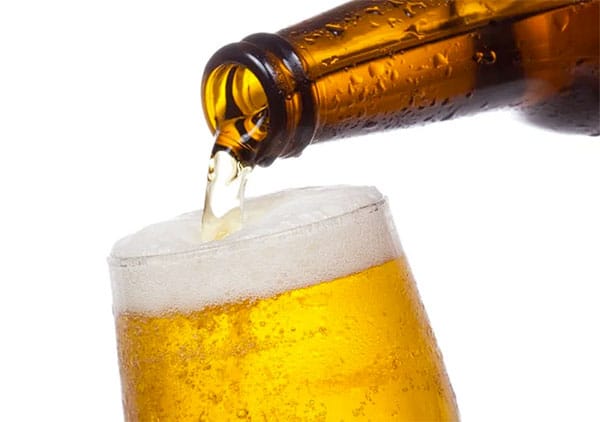 Last but not least, just because you may not have access to a draft beer system it doesn’t and shouldn’t mean you can’t enjoy your bottled beer from a frosty pint glass.  How you pour that beer, however, will differ slightly from the way you poured the previous two types of pints.

Bottled beer is almost always pasteurized during the bottling process.  This is done to extend its shelf life to about 3 months, which is much longer than that of a draft beer.

An interesting fact is that beer bottled in a brown-colored bottle (rather than a green or clear bottle) will actually last longer on the shelf, because the color of the bottle protects it from the oxidizing effects of direct sunlight.

One major advantage associated with bottled beer is that you—as the drinker—can avoid the bacteria that regularly build up in tap lines—bacteria that can also distort the flavor of the beer for the worse.

Of course, if your bar’s tap lines are cleaned, cared for and sanitized properly and often, the most significant advantage you reap from drinking bottled beer is the convenience factor and its ease in transporting.

So how do you go about pouring the perfect pint when dealing with bottled beer?  Let’s take a closer look:

If you are sensing a theme here, you are right.  Glasses that will soon contain delicious beer should always be rinsed well before use.

This helps significantly with head retention and washes away any soapy residue that may negatively impact the taste of the beer.

With your glass thoroughly rinsed, grab and open a cool bottle of your favorite beer from the beer fridge.  You will want to hold the glass at a 45 degree angle directly under the bottle, and start pouring the beer very slowly.

We say “very slowly” because a bottled beer that is poured too quickly will produce far more head than desired.

It will also create lots of foam and cause your beer to lose a lot of its carbonation, leading to a flat taste.

When the pint glass you are filling reaches about the halfway point in fullness, you will want to change the angle of the glass—from 45 degrees to 90 degrees, in the vertical upright position.

Continue pouring the beer, very slowly and very methodically.  If you are pouring from a standard 12 ounce bottle you should not have to worry about stopping until the bottle is completely empty.

However, if you are pouring from a pint or quart bottle, cease pouring the beer when the glass is nearly full—about one half inch from the top of the pint glass.

As with any beer, wait about 20-30 seconds before serving, allowing the head to form on the beer and the beer to settle. Serve and enjoy the perfect pint from a cold bottle of beer.

Congratulations!  You now know the perfect way in which to pour a pint, in your own beer glass, whether using a standard tap, a nitro tap or when pouring your brew from an icy cold bottle.