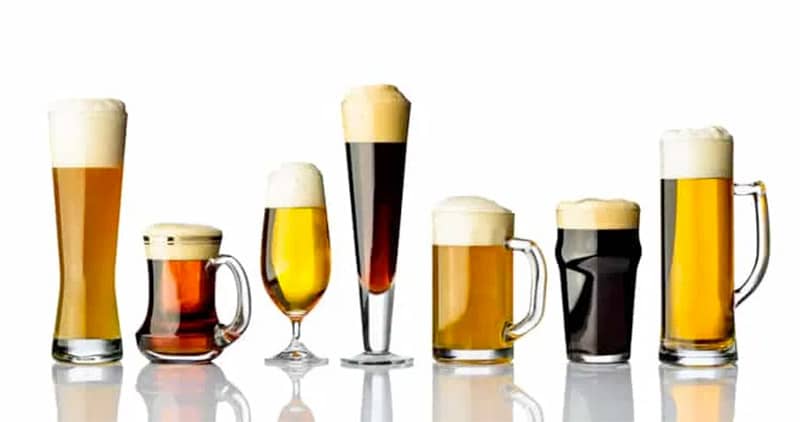 Craft beer is all the rage these days, with a new type or flavor seemingly coming out every month or so.  And with so many new types and styles of beers, it can often be difficult to keep track of all of them.

So, just how many types of beer are there?  This is a question we will attempt to answer in detail in the types of beer list below.

Most (but not all) beers can be typically placed into two very general categories:  Ales and Lagers.

Within each of these categories are a number of different subcategories and styles, each boasting its own unique body and flavor.  Here is a basic list describing the different types of Ales and Lagers currently available for purchase.

The term ale is used to describe a type of beer in which the yeast gathers and ferments near or at the top of the brewing vessel.  Because of that, ale is known as a top-fermented style of beer.

Ale also brews at a high temperature so that the yeast can act quickly.  Some ales can finish fermenting in less than 14 days, while others take somewhat longer to finish the fermenting process.

Ales are rich and complex, with more yeast-based flavors than lagers—the other types of beer we will list in this article.

Within the category known as ales there are several sub-categories.  These include Pale Ale, India Pale Ale (IPA). Brown Ale, Stout, Porter, Wheat Beer, and Hefeweizen.

Whether you select an American Pale Ale or an English Pale Ale, you should know that the term “pale” in this case was added quite some time ago to differentiate these types of beers from the darker Porter styles.

American and English pale ales have many factors that distinguish them from the other, but generally they tend to be gold or copper in coloring and possess a dry and crisp hop taste.

Some of the beers in this category include:

The India Pale Ale has a slightly higher alcohol content than regular pale ale.  It also boasts an intensely hoppy taste and aroma.

Some of the beers in this category include the American IPA, the English-style IPA, and the two we have listed below:

Made in the traditional English style, brown ales have a robust, malty flavor and can be very nutty and sweet.  They generally have a medium body and their name perfectly describes the color of these ales.

Some of the beers in this class include:

When you think of stout you should consider the Irish beers Guinness and Murphy’s, both of which fall into this category.  These beers are thick, almost black in color, rich and opaque.

Stouts get their flavor and color from roasted barley, and they often have a taste of malt and caramel, with little to no hop smell or taste.

Here are a just a few beers in this popular category:

Porters are very similar to stouts in taste and aroma, but these beers are made from “unroasted’ barley rather than the roasted variety of the grain.  Porters are dark in color, fairly sweet in flavor, with hints of chocolate and sometimes a sharp bitterness.

Some of the beers in the porter category include:

Distinctively German, all wheat beer uses top-fermenting yeast.  According to brewing laws, it must be made from at least 50 percent wheat malt, which contributes to its hazy, cloudy appearance and the unfiltered yeast sediment in the bottom of the bottle.

Wheat beers are very light in color, full-flavored and possess a one-of-a-kind taste with hints of banana, clove and vanilla.

Some of the beers that fall into the wheat beer category include:

Last but not least in the Ale category of beers is Hefeweizen, the most commercially successful type of wheat beer.

In the United States, these beers are regularly served with a lemon wedge to cut down on the intense yeast flavorings.

Here is just one of the beers that falls into this category:

Unlike the top-fermenting ales, in lagers the yeast sinks to the bottom of the vessel and ferments at a much colder temperature than its ale yeast counterpart. This slows the beer-making process down, sometimes considerably.

Below we will take a look at some of the sub-categories of lagers—Pale Lagers, Dark Lagers, Bock, Doppelbock and Oktoberfest—as well as a couple of the beers in each of these sub-categories.

Pale lagers are very well known, with names like Budweiser, Coors, Miller, Michelob, Pabst and others.  These beers, which are also known as American lagers, are light in color and alcohol content.

Some of the beers in this category include:

Darker and with more malt than their pale lager counterparts, dark lagers come in a variety of tastes, alcohol contents and aromas.

Some of the beers in the dark lager category include:

The bock style of beer comes from Germany and is typically brewed in the fall so as to be enjoyed in the colder winter months.  The bock style is a stronger lager, with heavy malt, a medium to full-body, light hos and a dark amber to brown color.

Here are just a couple of beers that fall into this category:

Meaning “double bock” in German, the Doppelbock style of beer is stronger and darker than bock.  It is also sweeter with more malt and a slightly higher alcohol content.

The lone beer in this category is the:

Last but not least we get to the category known as Oktoberfest, which is also the name of the beer festival.  This label is indicative of a Vienna style of “Marzen” beer, the German word for “March”.

This popular beer is brewed in the spring and stored to serve in autumn. It has a toasted quality with a sweet hint of robust malt flavors, and a deep amber appearance.

Now you know your ales from your lagers, did you know, that different types of beers tend to be poured in a certain type of beer glass? Our beer glass guide can help. So go on, grab your favorite keg of ale or lager, connect it to your home kegerator and pour a pint of ale in your own beer glass.