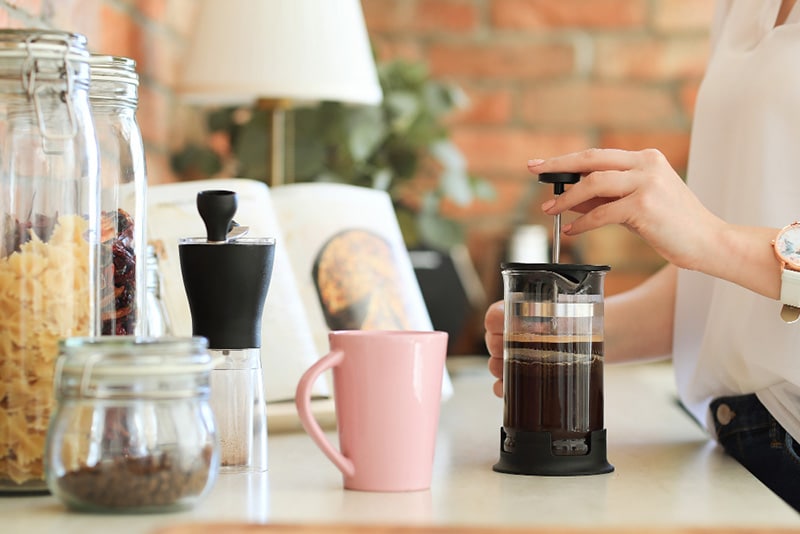 French press coffee makers are known to produce full-bodied coffee that is filled with a rich flavor.

The appliance is less costly than most professional-style coffee makers and it takes up much less counter space.

The worst thing is taking a sip of your freshly brewed coffee and it has a watery, weak taste.

Coffee prepared in a French press may come out weak for several reasons.

The water may not be hot enough or the coffee has not been steeped for the appropriate amount of time.

Furthermore, if the coffee beans are too coarse or not fresh, the coffee may come out weak.

In addition, the coffee may not be a strong enough roast or an insufficient amount of coffee has been used.

Common mistakes when making coffee in a French press

If you are new to using a French press you’ve probably made some obvious mistakes when preparing a cup of coffee.

Here are six mistakes that are often made when making coffee in a French press:

It is important to grind the coffee beans to the right consistency.

Ideally, you want the beans to have an even grind that is either course or medium-course.

This will greatly affect the outcome of the coffee.

If the ground coffee beans are too fine, it can cause the coffee to be very bitter.

On the other hand, if the coffee grinds are too coarse it will result in weak coffee.

Use the coffee plunger and push down on the grinds.

If it is difficult to press down, then the grind is too fine.

Alternatively, if you can easily press down using the filter, then the coffee beans are too coarse.

Coffee beans should be ground as close to the time that they will be used as possible.

Preferably right before brewing a cup of coffee, instead of grinding it the night before.

Not using a sufficient amount of coffee

There are many factors at play here.

The region, the variety of beans, and the type of roast are a few factors that will determine the end result.

The National Coffee Association advise using one or two tablespoons of ground coffee beans for every six ounces of water that is being used.

The amount of ground per ounce of water will ultimately depend on the individual drinking the coffee.

Some may prefer it even stronger while others may want it less strong.

But, getting this right is key to making the perfect cup of coffee.

The beans are not fresh

There are a few things to mention here. In essence, coffee beans are not something that you buy in bulk and store for later use.

Ideally, you should store coffee beans in a cool, dry space away from moisture and direct sunlight. Invest in a container with an air-tight lid as this will help to preserve the coffee beans for longer and keep them fresh.

Do not use stale beans or, even worse, using previously used ground coffee.

Not allowing the coffee to steep long enough

Steep the beans in the boiling hot water for four minutes, and not a second less, as this will produce a full-bodied, flavorful cup of coffee.

If the coffee is poured too quickly, the coffee solubles won’t have time to dissolve.

According to businessinsider.com, the ideal temperature to steep coffee grounds is 195°F to 205°F.

It is best to use a timer to make sure that the coffee steeps for the appropriate amount of time.

fter the water has been brought to a boil, it allows it to sit for up to a minute and use a thermometer to check the temperature.

If the water is not hot enough, it will result in a weak brew.

The type of roast

As mentioned before, some roasts are not as strong as others.

Roasts come in various strengths, such as:

The results of a light roast will differ vastly from that of a dark roast.

Dark roasts generally have a more bolder, smokey flavor, while light roasts may taste more watery or weak in comparison.

Find the roast that best suits your tastebuds and brew a strong cup of coffee using the steps outlined below.

Brewing the perfect cup of coffee with a French press

There are a series of steps that need to be followed in order to prepare a delicious cup of coffee using a French press.

Understanding these steps and the measurements involved is important to ensure that the coffee comes out full-bodied and aromatic.

What one individual considers strong may be considered weak by the next individual.

Luckily, there is a happy medium that should satisfy any coffee connoisseur.