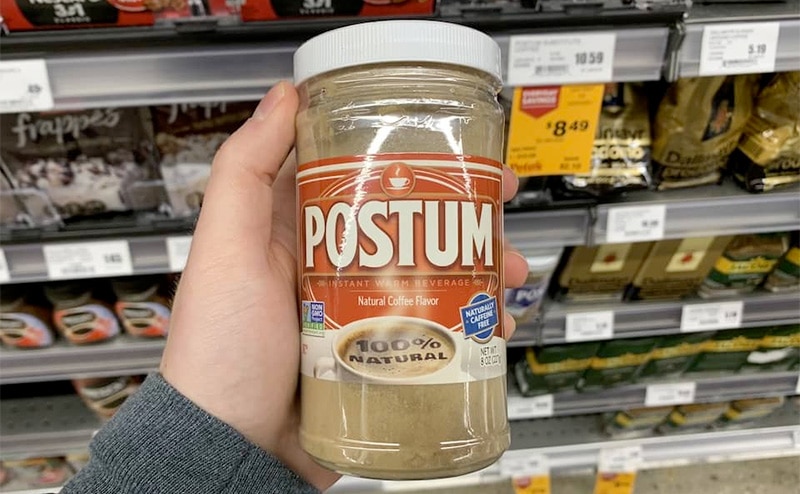 If you love coffee but are not fond of the side effects, chances are you’ve probably considered drinking decaf.

The truth, though, is that even decaf coffee contains a small amount of caffeine, about 3% to be exact.

There are coffee substitutes on the market that have more health benefits, such as Postum.

But getting your hands on a jar of Postum isn’t as simple as going to the local supermarket.

And if you do purchase a jar, you may be surprised at the high price.

Postum has seen a rather sharp increase in prices for several reasons.

The first and most important reason is a lack of demand for the product.

In addition, other business related factors also drive the price of Postum higher, such as, cost of production, marketing efforts, as well as added shipping costs.

Firstly, let’s start by explaining what exactly Postum is.

Many may be unfamiliar with the brand.

It is a healthier alternative to coffee.

Many people avoid drinking coffee due to the side affects associated with the drink such as sleeplessness, restlessness, nervousness, nausea, vomiting, and an upset stomach.

Other people avoid drinking coffee for religious reasons, opting for substitutes such as Postum.

The product does not contain any preservatives, GMO’s or caffeine.

Furthermore, it is Kosher and Vegan certified and holds many benefits for those with digestive problems and individuals suffering from high blood pressure.

Postum is available in two flavors: coffee and cocoa.

It is similar in taste to coffee but does not taste exactly the same.

Reviews on the product are highly favorable.

The history of Postum

As per their website, Postum was first produced in 1895, in a barn, in Battle Creek, Michigan.

It was created by a man known as C.W Post who was the founder of the Post Cereal Company.

The product was discontinued in 2007 due to a lack of demand.

In 2012, however, it was relaunched by a North Carolina couple, who owns a company by the name Elizas Quest food.

The company made the product available for online purchase as well as inshore purchase.

It is only available in the western parts of the United States.

However, due to a low demand for the product, the price rose from $3.50 per 8 ounce jar to $20 during that period.

The product is mainly sold on sites like Amazon and other online stores as well as on the product’s website.

Certain Walmart stores have the product on their shelves, but as previously mentioned, it is primarily in the western parts of the US.

The product seems to be sold out on Amazon.

The official Postum website, as of the date of this article, is running a buy three get one free special with each 8 ounce jar selling for $10.50 and 42 ounce pouches selling for $50.

Three reasons for the high price of Postum

There are several reasons, apart from low demand, that Postum prices are currently as high as they are.

These reasons seem to be more related to the conduct of business and the inability to scale.

The primary reason for high prices relates to a low demand for the product.

In order to scale prices, there has to be a high demand for a product.

Regardless of the many health benefits associated with Posthum, the demand for it remains low.

While in the past the product enjoyed popularity, it has not caught on with younger generations.

When it was reintroduced to the market, Postum enjoyed a short-lived revival of its popularity.

But with so many rivals entering the market, consumers were spoiled by choice, making it hard for the small company to stay ahead and compete.

Other products were able to scale due to a rise in demand for those products, which made the market more competitive and Postum seemed to have a hard time keeping up.

In addition, due to the simplicity of the ingredients, the internet was flooded with recipes, which meant that consumers were able to make their own batches at home.

Any business has overhead costs.

With the low demand for Postum, the company has had no choice but to increase the price of the product in order to cover overheads and stay afloat.

Advertising a product is one of the primary methods of getting the word out and attracting new customers.

The problem with marketing is that it is often a very expensive endeavor.

That said, the introduction of social media has afforded many companies the opportunity to promote a product online with little to no cost to the company.

The majority of Gen Z’s make purchases due to promotional advertisements on social media.

The company, Postum, seems to enjoy only moderate success on platforms such as Facebook, but has no presence on sites like TikTok. (As of the date of writing this article.)

In all honesty, making use of affiliate marketing would probably see the companies’ success soar again.

Especially among the younger, more health conscious generations, such as Gen Z.

Postum seems to be a great product. It holds many health benefits, tastes great, and is naturally void of caffeine.

It could potentially see a sharp rise in popularity again if the company can harness the power of social media marketing, more specifically, affiliate marketing.

There are many social media influencers, some with followers reaching up to several million, that will be able to help the company revive its popularity and see it soar to new highs with younger generational groups.