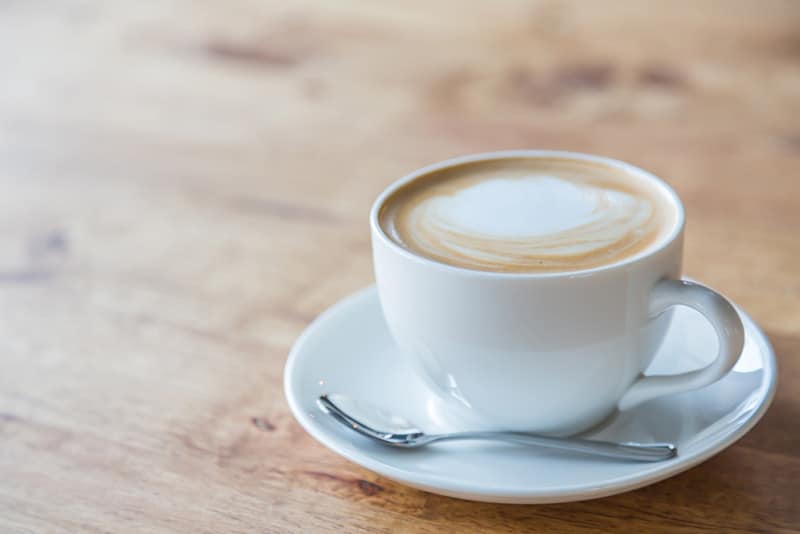 If you’re a coffee aficionado who heads to your local coffee shop in the morning to grab a Mocha or Latte to kick-start your day, then you’re one of the 62% of Americans who now enjoy coffee daily.

And, if you find yourself standing in a longer queue than usual, then it won’t surprise you that average coffee drinkers usually enjoy at least 3 cups a day.

That’s a lot of coffee!

However, the differences between the various specialty coffees at your local coffee shop can be subtle.

So, here’s what your barista could tell you to win an argument, pitting Mocha vs Latte against one another, if they had the time, of course…

Contents show
What is a Mocha?
Try These Decadent Flavours of Mocha:
What is a Latte?
Types of Latte:
How Mochas Differ from Lattes

What is a Mocha?

A mocha is similar to a latte, but what makes it more indulgent is the addition of luxurious hot chocolate.

Although many believe mocha is a caffeine drink, this is not quite the case.

Traditionally, café mochas consisted of a shot of espresso and a dash of dark chocolate.

The dark chocolate, which is now added as either sweet chocolate syrup, melted chocolate, or cocoa powder, provides a decadent, modern twist to a traditional mocha with the addition of hot frothed milk.

The sweet taste of mocha coffee comes primarily from the beans.

Mochas come in many variations with the choice of having it hot or cold.

Typically, each coffee shop will have its own unique spin on how it is made and presented.

This they achieve through blending different beans or selecting alternative non-dairy milk, such as soy or almond.

But they all generally follow the same tried and tested basic recipe.

The Café Mocha or just Mocha is also known as a Mochaccino and is believed to have originated with the Ottoman Turks way back in 1536.

Taking its name from al-Makha, a vibrant port city nestled in the Republic of Yemen.

Located on the Arabian Peninsula, Yemen was historically known as South Arabia and borders Saudi Arabia and Oman.

The Yemeni traders originally began exporting coffee beans through the port of al-Makha, traveling the trade route up the Suez Canal and then overland through the desert by camel to Alexandria in Egypt.

The beans were then transported to Europe via French or Venetian merchants’ ships.

Try These Decadent Flavours of Mocha:

Though the Caffe Mocha is considered one of the unhealthiest drinks at Starbucks, the Iced Skinny Mocha is supposedly a healthier option.

Instead of sugar, it is sweetened with sucralose.

Ordering the Grande will serve you up 120 gut-busting calories, 1.5 grams of fat, and 8 grams of sugar (11 teaspoons).

What is a Latte?

A Caffe Latte, often shortened to just “Latte” in English, is a drink of Italian origin.

It is made with espresso and steamed milk.

A latte is just a creamier, more full-bodied version of coffee.

Two-thirds of the latte is steamed milk, which is poured over a shot of espresso, and topped with a layer of milk foam.

If you love patterns in your coffee, then ordering a Latte will have you oohing and aahing over the decorative patterns experienced baristas create.

Unlike the chocolate in Mochas, there is no extra flavoring that comes with a standard latte.

This results in a more intense coffee flavor.

If you are sensitive to too much caffeine, then order this as a single shot as most coffee shops will give you a double shot as standard.

Some baristas serve lattes in a tall glass, while others will serve a latte in a normal-sized coffee.

It’s become the norm to bring your own coffee mug for take-away coffee, in which case you’ll end up with a lot more milk froth due to the large size (500ml) of most dash cups.

The Latte is believed to have been invented by a man by the name of Lino Meiorin in the 1950s.

It was standardized and became extremely popular in Seattle, Washington in the early 1980s.

Lattes then went on to spread extensively in the US and worldwide in the 1990s.

Lattes are served with steamed milk and an added layer of foamed milk, around 5ml, sitting on top.

The Flat White, which is a variation of a latte developed in New Zealand in contrast, is topped by a very thin, “flat” (hence the name) layer of steamed milk and nothing else.

The Flat White is much stronger than a latte, with different coffee blends producing more pronounced flavor tones.

As delicious as a latte is, it is possible to overdo the fat and calories.

So rather than using whole milk, order plant-based milk, which is lower in calories.

How Mochas Differ from Lattes

Both drinks are espresso-based but Mochas are sweet, chocolate-flavored espresso drinks made with steamed milk and often topped with whipped cream or chocolate shavings.

Lattes, on the other hand, are more espresso-forward (more of a coffee flavor) and less sweet.

Lattes are generally made with steamed milk and espresso and then topped with foam.

Once you start changing the types of milk, the drinks take on a totally different flavor profile.

The Mocha coffee bean roasts have a variety of different coffee beans.

However, the original blend is based on the coffee-plant species Coffea Arabica, which is native to Yemen and is now grown around the world.

Café Mochas can be made with espresso beans or a medium roast Mocha Java blend, though you will find that most coffee shops exclusively use espresso beans for their cafe mochas to create a richer, deeper flavor.

Medium roasts and dark roasts are the preferred blends for Lattes.

These coffee roasts have a medium to full body, slight acidity, with a few strong flavor undertones.

The acidity provides the bright, dry sensation that livens up the taste of your coffee.

The darker a coffee is roasted, the less bitterness it will display.

The acidity is balanced by the alkalinity of the milk, which gives the drink its slightly sweetened character.

So, the next time you order your coffee, try something new. You won’t be disappointed.