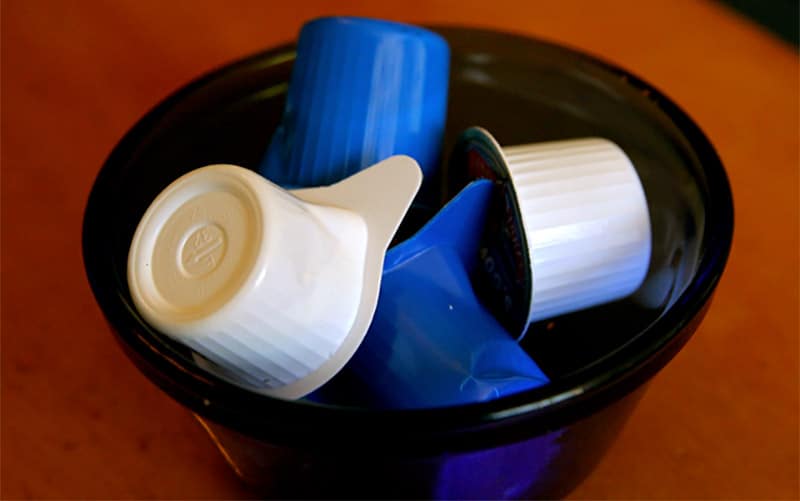 Lots of folks like to have cream with their coffee, and some even enjoy it more than adding any sugar at all.

However, because there are so many different types of creamer, it gets a bit confusing for folks.

For the most part, it’s easy to discern what is artificial and what is natural creamer.

However, when the common practice is to leave creamer out on the table for extended periods of time, how safe is it to actually use, even with a piping hot cup of coffee?

Contents show
Starting Off With the Basics
Background On Coffee Creamer
Types of Creamers Available & What to Expect
Natural, Dairy-Based Creamer
Non-Dairy Creamer
How to Know if Something is Going Bad
Pay Attention to Sitting Creamer

Starting Off With the Basics

Anything that is a powder-based creamer has no issue being outside of the refrigerator.

In fact, most restaurants usually have packets of dried creamer, artificial or real, sitting on baskets at the table.

However, a good number of these creamers are either dehydrated cream powder or artificial creamer altogether.

In both respects, as long as they are not exposed to moisture, the creamer can last for months until its expiration date is reached.

So leaving these out is no issue at all.

Actual dairy creamer in liquid form is another matter altogether.

This also comes in two forms, sealed containers and regular cream from a container or carton.

The cream from a carton or container is pretty much the same exposure risk as any other kind of liquid dairy.

Typically, dairy can only stay out of refrigerator temperature for under an hour.

After that, it warms to room temperature, which is more than enough for bacteria to kick in and begin to contaminate the liquid.

Many folks try to keep the creamer servers in the fridge, and only put it on the table when actually needed or to be used.

Then, the remainder is thrown away and the container washed.

Sealed creamer is a bit of a mix because it involves artificial preservatives and ingredients that allow it to stay out of the refrigerator longer.

However, in many cases, it’s provided at the table iced or cooled.

Coffee creamer first arrived in 1945. It was technically invented towards the end of World War II by Robert E. Rich.

That said, people had been putting milk in their coffee and tea for years, but coffee creamer as a product didn’t arrive on any consumer shelves until Rich’s product was distributed.

The first big name that still exists today was Coffee-Mate, produced by Nestle.

It first saw an appearance in 1961 and came in multiple flavors as well.

A key factor of the early creamer was its dairy-free nature.

Whether in powder form or liquid, the lack of dairy allowed creamer to be used in more situations, environments and conditions without having the fragility of milk or real cream needing cold temperatures to stay safe.

Today, many of the creamers available have gone even further, allowing for multiple versions of excluded elements such as no fat, no sugar, no chemicals and so on.

Types of Creamers Available & What to Expect

This type is, just like the title, a milk derivative or similar diary cream.

It tends to be strong, extremely temperature sensitive and will go bad within the hour at room temperature.

It’s probably one of the most common ways to end up with food poisoning if not for the hot coffee it gets poured into killing the bacteria to some extent.

Dairy creamer in dehydrated form, however, is powder-based and can last much longer as long as it is kept dry.

The results tend to be far less flavor, however.

Removing the key problem factor of the dairy element, creamer is also available in liquid and powder form with no milk or cream involved.

This type of creamer can stay out of the refrigerator much longer in liquid form, but it will eventually degrade.

The powdered form can last for weeks and months without issue as long as the package is sealed.

It comes in lots of different flavors, and folks often have two or three to switch around.

Again, these can function at room temperature for as long as they are kept closed and no air is allowed into them after manufacturing.

How to Know if Something is Going Bad

When it comes to dairy creamers, your nose is probably one of the best ways to know something is off.

If you’re not sure how long a creamer has been left out, especially a dairy one, give it a good sniff.

Any kind of odd or bad smell should be a warning to avoid. Taste can be a second option, but try not to ingest a lot.

In packaging, the expiration or sell by date tends to be a good measure of when something is suspect.

Some folks will argue that food is still good after the date, but if one wants to be sure, then the expiration date works.

Keep in mind as well poor storage will damage creamer of any kind faster than normal.

Especially when there is a lot of moisture nearby, creamer packaging that is non-plastic will eventually let the moisture penetrate and foul the contents to the point that they are not usable any longer or safe to ingest.

And with liquid creamer, it’s pretty much a standing rule to refrigerate any form of liquid creamer once it has been opened to slow down the deterioration process as bacteria develops.

So, in summary, how long can coffee creamer sit out?

It depends on the type of creamer involved, liquid or powder, and whether it has already been opened or still sealed.

Creamer provides a greater range of coffee and tea enjoyment, which has been around for decades and will continue to be part of the coffee-drinking world for years to come.

However, not paying attention to how it has been stored is a fast way to get sick with food poisoning, especially in cafes or restaurants providing dairy creamer that is not kept cold.

Watch your surroundings and when eating in public, opt for powdered creamer when you’re not sure.