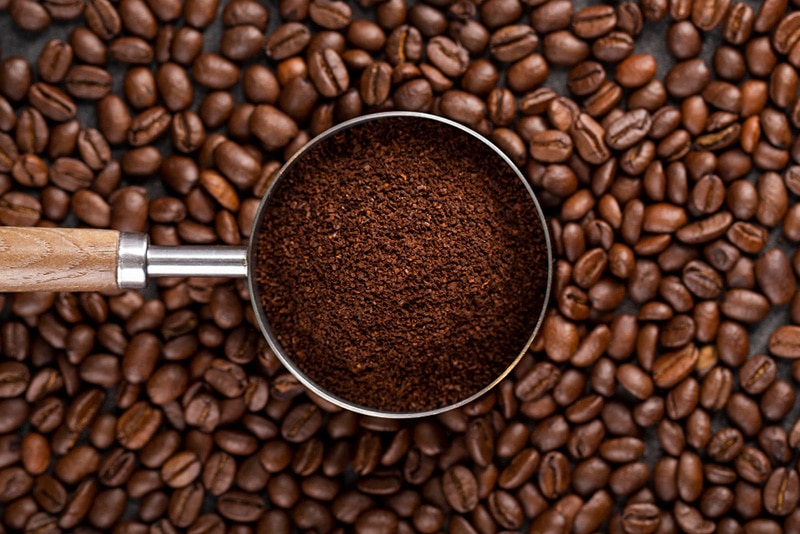 The process coffee lovers use to make the beverage has come full circle.

Before the 19th century, families used to grind beans to produce this hot drink.

That’s until a pair of Pittsburgh brothers introduced pre-roasted coffee in 1964.

Today, many people have returned to grinding their own beans.

This isn’t only done to extract the maximum flavor from these products.

It’s also because so many types of beans are available.

Unfortunately, those who like darker roasts run into issues with their coffee grinders.

Due to the way they’re baked, their natural oils come to the surface.

In turn, these oily beans clog your coffee grinder as the grounds stick together in a clay-like formation.

Let’s break down the reasons why this happens and solutions to the problem.

What’s the Purpose of a Coffee Grinder

Simply put, a coffee grinder pulverizes the beans. Its purpose is to create the grounds placed in the coffee maker.

A major reason people prefer to grind their beans is to control the end product.

This helps release a certain level of aroma and taste they feel isn’t found in packaged products.

Original grinders came with handles that turned blades to break the coffee beans.

Technology advancements have created other forms of this product.

For instance, a burr grinder is a handheld version that allows the user to control the cut level.

It seems like more coffee bean varieties are introduced to consumers each year.

It’s not that they didn’t previously exist.

Rather, it was simply the popularity of pre-roasted and instant coffee that kept drinkers away from other varieties.

It wasn’t until Starbucks opened their first Seattle coffee shop in 1971 that people realized there was more to the beverage.

Since then, the movement to produce or purchase fair trade beans has grown.

Where grinding was once done at specialty shops and supermarkets like A&P, these beans are now available to purchase by the general public.

There are four types of species coffee beans fall under.

Of the four species, Robusta ends up being the darkest beans.

Additionally, due to the roasting process, they produce the most oil.

The beans start as a fruit called the coffee cherry.

Similar to items like bananas, they’re green when removed.

The temperature and duration they’re cooked determine their end hues.

Robusta beans are roasted the most, hence their dark brown and black colors.

As they go through this process their natural oils start to seep out.

The more they roast the more their oils coat the beans’ exteriors.

The darkest roasts seem to be greasy.

Case in point, oily skin combined with dead skin cells are components that lead to acne.

The same goes for a blade grinder.

As the beans are cut into grounds they don’t separate.

Instead, they clump together to make hard pockets of material.

Should enough of these grounds accumulate on the blades, it clogs up the grinder.

As the grounds accumulate they stop additional beans from smoothly flowing into the grinder.

Eventually, the machine will either have a hard time producing coffee or will be incredibly slow.

There are still be pockets of gummy grounds in areas you can’t reach.

These continue to impede coffee production.

Eventually, the machine needs to be serviced or replaced if unrepairable.

There’s no need to replace your oily beans with another species.

There are several preventive measures to take to minimize the issues.

Use a burr grinder

Although a burr tends to be smaller than a standard grinder it’s also simpler to clean.

Its parts are easily disassembled.

Therefore, you are able to eliminate all oily ground clumps.

Some people use older grinders to mash their beans.

Unfortunately, they don’t offer the option of newer models to change the cutting levels or speed.

Thus, consider purchasing a burr or disc grinder to control how finely the oily beans are pulverized.

Have the beans ground elsewhere

Though you enjoy the aroma that comes from grinding your own beans it’s not worth the time it takes to clean your machines.

If the location where you purchase them has a machine, then ask them to do the honors.

Most likely, they have a professional device that minimizes the issues related to the oils.

You take your coffee seriously.

This probably means the grinder you’ve purchased is a higher-end model.

Should this be the case be careful with how you transform oily beans into the grounds for brewing.

Overall, you want both the preparation and the drinking of the final product to be enjoyable.