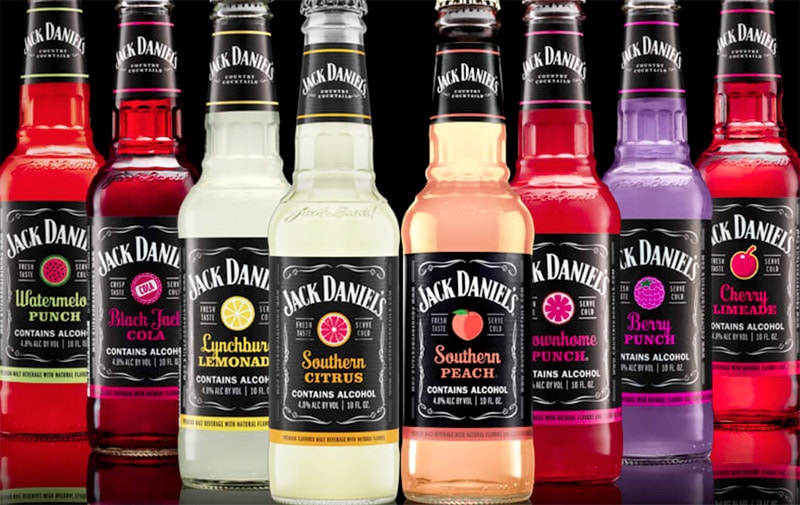 Chances are pretty good that you’ve encountered wine coolers at least once in your life.

I remember being in high school and having some of the cool kids show up at a party with some wine coolers and thinking we were all so cool drinking them.

Wine coolers are often though of as a girly drink and not very manly.

That may have you wondering if wine coolers are basically the same as beer, except more appealing to women.

But the truth is that no, wine coolers are not beer.

Let’s dig in a bit to look at the differences between wine coolers and beer.

For a lot of people, wine coolers are drink choice because they seem like they’re not as heavy as a beer.

And in a sense, that is correct sometimes.

Wine coolers tend to have a low alcohol content value.

On average, wine coolers have an alcohol content that ranges from 4% to 7%.

One of the biggest differences between wine coolers and beer is the sugar content.

Wine coolers are packed with sugar and have a much higher amount of sugar than beer.

Wine coolers are made out of wine and fruit juice, which is why they have so much sugar in them.

In addition to the wine and fruit juice, they are also made in combination with a carbonated beverage and sugar.

So, what you end up with is something that tastes a lot more like a sugary soda than an alcoholic beverage.

People tend to view beer as a heavier drink than wine coolers, so something that tends to make you drunker.

On average though, 12 ounces of regular beer is usually around 5% alcohol.

So, on average beer is stronger than only the lower alcohol content wine coolers.

Of course, there are also some beers with really high alcohol content.

FAQs About Wine Coolers vs Beer

Here’s the answers to some commonly asked questions.

Is Seagrams a beer?

Seagrams are malt-based alcoholic beverages, which means they aren’t really a wine cooler or a beer.

However, malt-based beverages is just another name for a wine cooler that uses malt liquor instead of wine.

Some people think of Seagrams as a flavored beer.

So, Seagrams is essentially a wine cooler.

The classic single-serve bottle contains 200 calories and clocks in at just 3.2% ABV.

For drink that packs more of a punch, Seagram’s Escapes offers a Spiked option for its most popular flavors with 8% ABV.

Is a wine cooler alcohol?

Yes, a wine cooler is alcohol.

No matter how it is made, a wine cooler has a definite alcohol content.

Is Smirnoff a wine cooler or beer?

Some people think of Smirnoff as a flavored beer since it is a malt-flavored beverage.

But the reality is that Smirnoff is a wine cooler that is made from malt liquor.

Smirnoff is not a beer.

No, Mike’s Hard Lemonade is not a beer.

Mike’s Hard Lemonade is a flavored malt beverage, which makes it a wine cooler.

Why is it called wine cooler?

Because the drink was meant to offer a lighter tasting alternative to wine or beer.

Are wine coolers still made?

Yes, you can still buy wine coolers to drink.

Some popular brands of wine coolers are Smirnoff, Seagrams, and Mike’s Hard Lemonade.

However, it is only lightly carbonated.

However, it is only lightly carbonated.

First introduced in Canada in 1996, a mix of vodka, natural flavors, and carbonated water.

No, Smirnoff Ice is not a beer – it is a malt-based beverage, which classifies it as a wine cooler.

As the label reads, it’s a “malt beverage,” meaning it’s brewed like a beer.

Is White Claw beer or a wine cooler?

No, White Claw is not a beer, but it does classify as a wine cooler.

While White Claw is called a Hard Seltzer, it is actually just another flavored malt-based beverage, aka a wine cooler.

And that alcohol comes from fermented sugars derived from malted gluten-free grains.

Is Hard Seltzer a wine cooler?

Technically, hard seltzer is defined as carbonated water mixed with any alcohol base, including wine, malt, and distilled spirits (source).

Not all hard seltzers are wine coolers, but those that are made from wine or malted beverages and sweetened with fruit juice do classify as a wine cooler by definition.