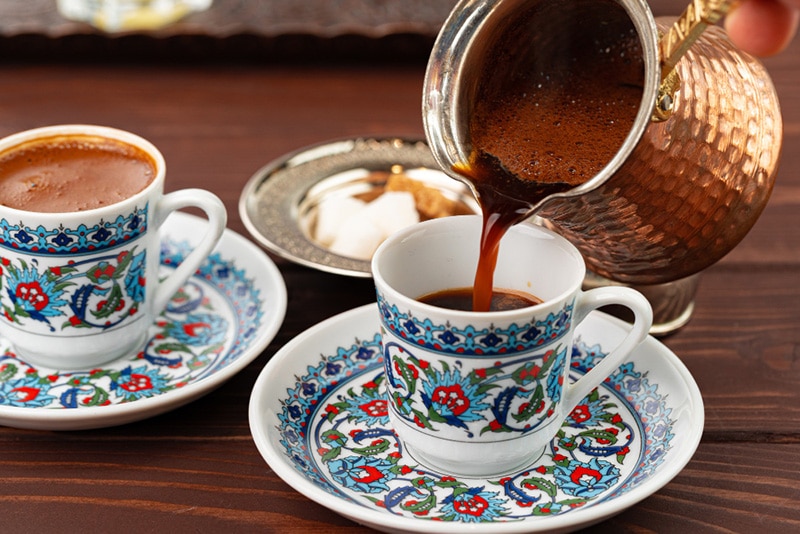 If you’ve ever ordered a Turkish coffee at a coffeehouse and wanted to learn more about their method of brewing, you more than likely came across the term “foam” as it related to the type of coffee served.

After all, some coffees are able to build foamed milk on top of the beverage for added presentation value.

However, not all varieties of Turkish coffee brew produce this effect.

So why does some Turkish coffee foam and other varieties do not?

There’s a few reasons for this, which we’ll cover below.

What Prevents Turkish Coffee From Foaming

There is more than one reason that a Turkish coffee won’t foam, so we’re going to cover each of them for you below.

Fresh coffee is the best when it comes to getting Turkish coffee to foam.

The rule here is that the fresher your coffee beans, the better the foam when making Turkish coffee.

For the ideal foamy brew, you need fresh ground coffee, which means you may need to replace the coffee beans you’re using.

We recommend finding a local roaster for the freshest coffee beans.

If you’ve looked up a tutorial for making Turkish coffee at home, then you’ve likely read that you need to boil the coffee.

But the reality is that boiling water is the nemesis of coffee foam.

So, why do all those tutorials tell you to boil the coffee? Likely a translation problem as English is not the native language in Turkey.

What does this mean for you?

Don’t let the water boil when making your Turkish coffee at home.

As a general rule, if your Turkish coffee is sweetened with sugar before brewing begins, then there’s a good chance it will be difficult for this particular variety to develop any sort of foam or head on its own right after brewing.

This is because sugar tends to decrease the quality of foam, which is why many coffeehouses will not include it in their brewing process.

However, if you are serving Turkish coffee that is unsweetened or only mildly sweetened with sugar, then there’s a good chance it will be able to produce some sort of head on its own once brewed.

The reason for this relates to the amount of sugars found in many types of sugar substitutes or non-dairy creamer powders used in the preparation steps before brewing begins.

So what about other alternatives?

If your goal is to serve Turkish espresso with a foamed milk topping without using any type of artificial sweeteners, you should consider using honey or another natural source of sugar instead.

But if you are looking to produce Turkish espresso with a foamed milk topping without using sugar, then it’s recommended to use an alternative source of natural sweeteners instead.

These could include agave nectar, brown sugar, or even stevia powder, for example.

And while these do not typically affect the quality of foam produced by other varieties of Turkish coffee, they still provide your taste buds with that sweet aftertaste.

So, while your ability to brew flavorful Turkish coffee may be limited by the type of sugar used in the preparation steps before brewing begins, there are some alternatives available so you can still serve up something tasty once all is said and done.

The History Of Turkish Coffee

Turkish Coffee is most popular in the Middle East, although parts of Europe and North America have also come to enjoy this style of coffee.

It is made with a special grinding method that creates an extremely fine powder.

The water is then brought to a boil three times before sugar and coffee are added to create the beverage.

It is not known exactly how or when coffee was discovered, but we do know that its creation probably occurred during the reign of the Ethiopian emperor, Menilek I.

We also know that throughout its history it has travelled around the world from Arabia to Italy, France, Turkey, and all the way to Ethiopia.

How Do You Make Turkish Coffee?

This type of coffee is prepared with a long-handled pot called an Ibrik.

A thimble-sized cup called a cezve is another utensil used in the making of this style of drink.

As for what goes into it, Turkish coffee includes ground roasted Arabica beans, cardamom seeds, water, and sugar, which can be brown or white, depending on your preference.

The ingredients are added in the precise order indicated below.

Water is brought to its boiling point.

While it’s heating up, coffee and sugar are measured out and placed in the cezve or Ibrik.

One tablespoon of each is typically used per cup, although you can adjust it to your personal taste. Some recipes call for two tablespoons of sugar, while others use two teaspoons or no sugar at all. It all depends on your taste buds.

The cezve or Ibrik is then placed on the stovetop.

When the water reaches its maximum temperature, it’s poured into the mixture inside the utensil until there are three ounces of liquid below the rim line.

Stirring follows but only after turning off the heat source so you don’t burn the coffee.

After stirring to mix the ingredients, the mixture is brought back up to a boil one more time before being removed from the heat.

It’s important not to let it fall below this point as it will begin giving off a bitter taste if allowed to sit too long before serving it.

A special tool with a sphere for holding liquid and a long handle attached to a wire or mesh screen is used for topping off your drink with both ingredients.

The number of times you’re able to do this depends on what you’re pouring out of, so keep practicing until you can produce just enough foam for your taste.

If you want an authentic Turkish-style coffee experience, then it’s suggested that you drink your beverage with just enough foam to cover the cream.

That is unless, of course, you’re being offered a cup made by someone who doesn’t have as much experience with this practice.

In which case, it’s perfectly okay if they pour too much foam into your coffee so you’ll enjoy it even more without any lumps or pockets of air getting in the way!

Now that you know how to brew Turkish coffee, why not try it at home?

It’s certainly worth the effort, and if not for anything else, then to impress all of your friends and family around mealtime!