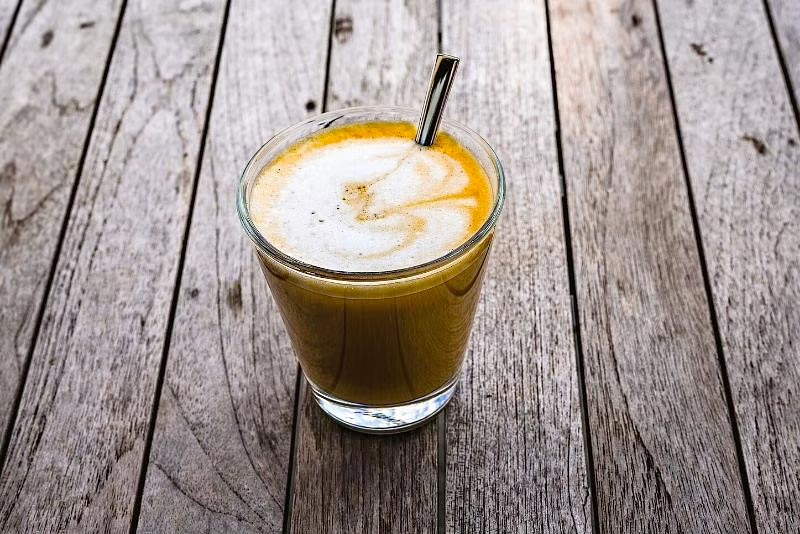 Anyone who frequents a fair amount of third wave coffee shops (read: not a chain like Starbucks) has probably become accustomed to a range of initially weird-sounding drinks on the menu.

Two you may have seen are the cortado and the flat white. These seem like innocuous drinks at first, but if you’ve researched them, you’ll see there’s a lot of debate about the similarities and differences between these beverages.

The cortado vs. flat white battle is a lot more complicated than it seems. Some people argue that the only difference is the drinking vessel while others maintain that it’s all in the milk texture.

So what really is the difference between a flat white and a cortado? To answer that, we’ll need to define each beverage and then compare them.

The Definition of a Cortado

At most coffee shops, a cortado is a small 4-5 oz. drink that’s served in a small rocks glass called a gibraltar glass.

You’ll often see latte art adorning the top of a cortado, and most importantly, you’ll taste an even balance of espresso and milk. This makes it stronger than a cappuccino or latte while not being as strong as a straight espresso or macchiato.

The generally accepted recipe for a cortado is a double shot (~18 grams) with an equal amount of milk for an even 1:1 ratio of espresso to milk.

This recipe is reflected in the name of the drink itself; cortado comes from the Spanish “cortar,” meaning to cut. In essence, the espresso is “cut” with the milk to make it a bit less strong.

The texture of the milk is important. Classically, cortados have less froth than a latte, so you won’t experience a thick head of foam at the top of the beverage. Instead, there will be just a thin layer of foam at the top.

The serving vessel is also important. While some shops do serve cortados in mugs, it’s almost universal to see cortados served in gibraltar glasses.

In fact, cortados are sometimes called gibraltars for this reason.

The Definition of a Flat White

The flat white is best known for being one of the best selling milk drinks in coffee joints across Australia.

It recently became a staple in US coffee culture, and its similarities to the cortado (and the almost simultaneous appearance of the two drinks on American menus) have left more than a few coffee shop patrons scratching their heads.

The name “flat white” tells you a lot about the drink. The “flat” refers to the texture of the milk. It should not have foam but rather microfoam, making the drink “flatter” and less frothy than a latte.

Milk that is microfoamed will be creamier and sweeter than milk frothed for a latte. Microfoam is still able to make latte art, so you’ll often see art on flat whites.

The flat white is also a small drink, ranging from 5 to 6 ounces. It’s often served in a small cappuccino or latte mug, and it gets a double shot of espresso.

While cortados are sometimes served in mugs, flat whites are never served in glasses.

Given these definitions, you might still be wondering what the difference is between a cortado and a flat white.

There are three main differences: the milk texture, temperature, and drinking vessel.

Basically, the milk in a cortado will be less frothy than the milk in a flat white. Even though milk steamed for cortado can still produce latte art, it will often appear thinner than standard latte art because the milk is less frothy.

Cortados also don’t necessarily require microfoam, which is an essential aspect of the flat white.

So flat whites will be thicker but still “flat.” If you like, you can think of a cortado as a “flat flat white” served in a glass (although that’s generalizing).

Both drinks are cooler than lattes, but typically, flat whites are a touch warmer than cortados.

Cortados are meant to be consumed rather quickly, while flat whites can last a little longer while still hot.

This isn’t universal, but it holds true in many instances.

This is actually a large part of the debate, as purists will argue that cortados come in gibraltar glasses and flat whites come in mugs.

This does change the drinking experience of each beverage, which is admittedly quite important when comparing these two drinks.

Because of the less frothy milk, a cortado (served in a glass) will give a lighter drinking experience, but a flat white (served in a mug with its more textured milk) will feel heavier and a bit more substantial.

The cortado vs. flat white debate is tricky to understand, but ultimately, they’re similar drinks with a few small differences.

Keep in mind that many people (and coffee shops) still use the terms interchangeably, so if you want to know exactly what you’re getting, don’t be afraid to ask a barista.