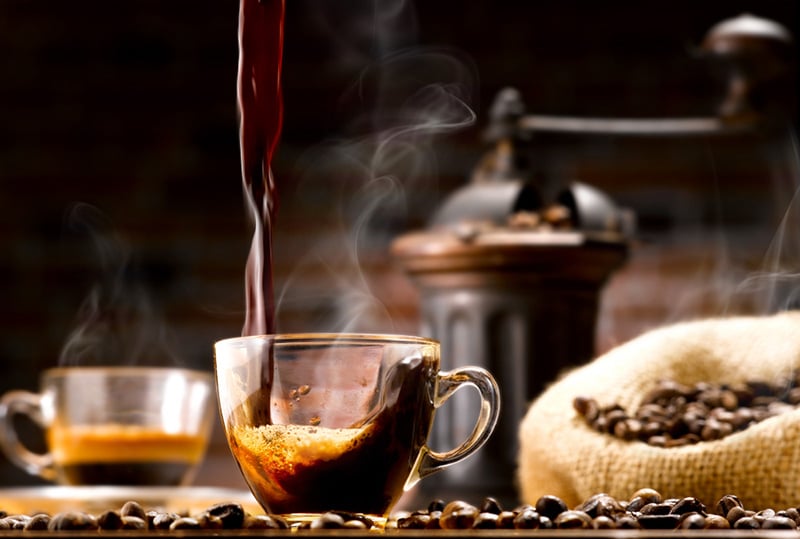 Are you wondering if coffee loses caffeine over time?

Perhaps there are times when you leave a cup of coffee on your desk for an hour or two and jump on a video call with a client.

When you get back, the coffee is cold, and you pour it down the drain because you think it’s lost caffeine?

What you’re not aware of is that coffee can maintain its caffeine over time.

So no, coffee does not lose caffeine over time.

A study by the American Academy of Sleep Medicine found out that caffeine can also last in your system for up to 5 hours.

Meanwhile, people sensitive to caffeine can have it in their system for up to three days.

The only way to remove caffeine from your coffee is when you decide to decaf it, which is another topic on its own.

In this article, we define caffeine and answer tell you how long it can last in your cup.

Contents show
What is caffeine?
Facts About The Caffeine In Brewed Coffee & Coffee Beans
1. Does how you store your coffee determines how long the caffeine may last?
2. With coffee beans, the aroma fades with time but not the caffeine.
3. A cup of coffee will be flavorful for a short period.
4. What happens to the caffeine when you reheat a cup of coffee?
Last Thoughts

Caffeine is a drug that stimulates your brain and your central nervous system.

It is one of the most popular psychoactive stimulants that anyone can take.

In comparison to illegal drugs, caffeine is safe and readily available across the world.

You find it in energy drinks, coffee, green and black tea, and chocolate as well.

Some people use caffeine as a stimulant drug that keeps them awake and alerts at work.

Others ingest it in their system for its health benefits like stimulating thermogenesis and helping the body to generate more heat and energy from digesting food.

Others use caffeine to improve physical performance during endurance exercise.

Caffeine has a melting point of 235 C/455 F, which is higher than any method of brewing coffee.

Now you understand why caffeine doesn’t fade away over time.

ALSO READ: How Does Roasting Time Of Coffee Beans Affect Their Caffeine Content?

Facts About The Caffeine In Brewed Coffee & Coffee Beans

Here are some facts that you need to know about caffeine in your coffee:

1. Does how you store your coffee determines how long the caffeine may last?

If you keep a brewed cup of coffee in a sealed container, then stick it in the fridge, the caffeine in it does not really go anywhere at all.

But when you drink it later, you may think the caffeine is gone due to the flavor difference.

The only drawback is that your coffee will lose its original flavor and may not taste as good as a hot cup you brewed a few minutes ago.

Hence, when you drink stale coffee, you may think that there is no caffeine in it, but it is still there.

In reality, how you store you coffee really only affects the flavor, and how long it lasts, instead of the caffeine content.

2. With coffee beans, the aroma fades with time but not the caffeine.

When you store coffee beans for an extended period, their aroma will fade but not caffeine.

Your coffee beans will only be fresh for two to three weeks, but thereafter they will slowly become stale.

And the aroma is the first thing to go.

That’s why every time you buy your coffee beans, you need to check the expiry date.

The reality is that coffee beans that are properly stored will retain their caffeine for a minimum of four years.

After that time period, the caffeine started to break down and become unstable in the beans.

So, unless you’re stocking a bunker for the apocalypse, your coffee beans won’t ever lose their caffeine content.

3. A cup of coffee will be flavorful for a short period.

If you brew a cup of coffee and leave it, the flavor in it will last for nearly an hour.

But that will largely depend on where you keep it; as your coffee becomes cold, the flavor fades quickly.

The aroma is the first thing to fade as the coffee cools, so be sure to drink that hot cuppa quickly!

4. What happens to the caffeine when you reheat a cup of coffee?

Since cooling coffee loses its aroma and flavor, then you may be curious is reheating it helps to bring back that flavor and aroma.

The caffeine content stays the same in a reheated cup of coffee.

But the coffee will likely taste stale and weak, which will make you think it’s lost caffeine but that’s not possible.

You just have old, bad coffee that should have been consumed after first brewing and pouring it in your cup.

Remember, flavor and caffeine are closely related, and they have a way of influencing one another.

So instead of focusing only on caffeine, you need to consider flavor because a cup of coffee without flavor doesn’t taste like coffee at all.

The truth is that the caffeine content of coffee does not reduce or go away over time, but your brain thinks it does because stale coffee tastes like it lacks caffeine.

Just drink your coffee when it is freshly brewed and you will get that aroma and flavor that you desire, even though the caffeine content remains whether the coffee is fresh or days old.