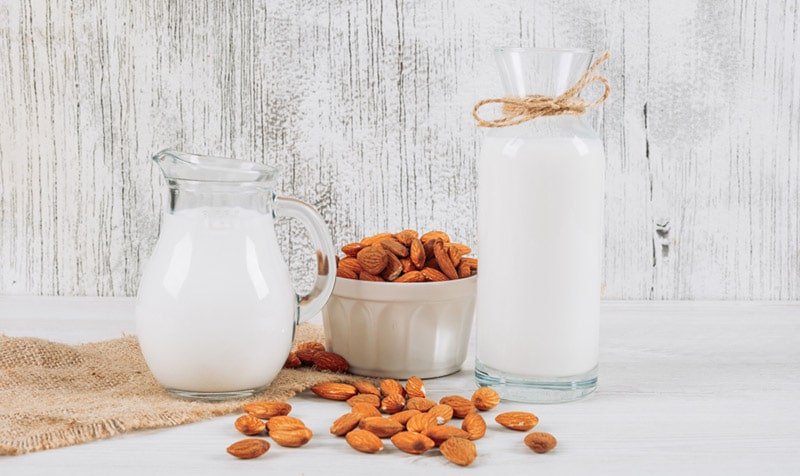 Coffee drinkers in search of an alternative to dairy creamers have turned to alternative forms of milk.

Some have gone with an option like coconut milk or oat milk.

Meanwhile, others have turned to almond milk.

Almond milk has grown in popularity over the last few years for its benefits.

For instance, it has a nutty and creamy flavor similar to cow’s milk.

Plus, it’s a good substitute for vegans, those who have dairy allergies, and people who are lactose intolerant.

Despite these plusses, those who love coffee have noticed something when they add almond milk to their drink.

The cold liquid begins to curdle.

As a result, the coffee becomes less appealing.

So, why does this occur?

Additionally, is it safe to drink coffee with curdled almond milk?

The main reason why this milk form curdles is due to temperature differences.

Generally, this doesn’t happen with the dairy version due to its stable protein structure.

Its bonds help withstand the temperature extremes when poured into the coffee.

Since almond milk’s structure is weaker it doesn’t have the capabilities to quickly break down in high heat.

In reality, what happens is the liquid’s atoms move rapidly around to generate a chemical reaction.

As the composition breaks down, the almond milk takes on its unusual appearance.

This is one reason why some blends are more bitter than others when drank black.

When combined, the two liquids cancel each other out.

Though the coffee’s pH levels rise slightly when dairy milk is poured, it resumes normal levels not long after.

On the other hand, almond and other nut milk are alkaline-forming foods.

In simpler terms, they have the power to neutralize acids.

Therefore, curdling in coffee signifies a breakdown of the coffee’s natural acidity.

Dark roasts like espresso have less acid to them.

This is due to the way the beans are prepared.

The darkest roasts, such as those from France or Italy, have no acid levels.

Is It Safe To Drink?

While it doesn’t look appetizing, coffee with curdled almond milk is safe to drink as it doesn’t have the same composition as dairy milk.

When this form starts to curdle it means that bacteria are ready to generate.

As they start to produce more acid, the structure of dairy milk becomes lumpy.

As mentioned above, curdling occurs in almond milk when the protein structure starts to collapse.

In some cases, stirring your coffee may help break down some of the smaller lumps.

How To Minimize Curdling

There are several ways to minimize almond milk curdling.

This is the reason you have a sour stomach after drinking several cups.

Therefore, to minimize almond milk curdling you may want to switch.

Darker roasts have a lower pH.

Yet, the loss of acidity also means a lack of flavor.

So, consider one of the acid-free light roasts available on the market.

Though they cost more, the return on investment is a better-tasting coffee.

Not all almond milk varieties curdle.

Some of them are made exclusively for use in hot coffee.

Consider these brands in your search for a dairy alternative.

In particular, look for barista-grade almond milk, as this type is regularly used at coffee shops.

The main reason curdling takes place is a shock to the almond milk’s structure.

In a way, it’s not much different from the reaction we have when we jump into extremely hot or cold water.

This is why one of the best ways to minimize curdling is to regulate the temperatures of both coffee and almond milk.

Let the coffee cool down for a bit.

At the same time, heat the almond milk.

Through this process, both liquids have temperatures closer to each other.

As a result, the chance of curdling is greatly reduced.

In the end, there’s good news all around for almond milk users.

In addition to being healthier for some, the curdling that occurs isn’t anything to worry about.

In fact, you can drink the coffee without risk of getting sick.

Second, there are ways of preventing curdling.

Through temperature control, minimizing the coffee’s acidic content, and using different almond milk brands, the way the liquid goes in should be the same as cow’s milk.