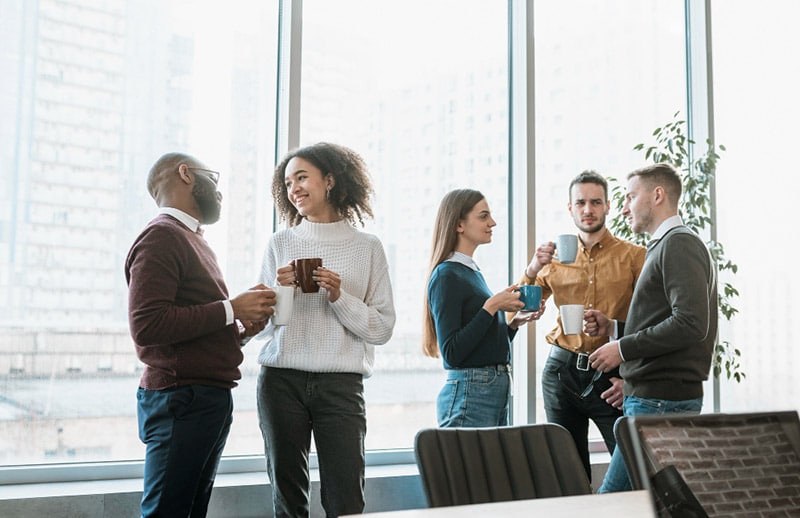 If you’ve ever worked in an office, then you know that there is one universal truth – office coffee tastes terrible.

Like me, you may wonder how something so good (coffee) can taste so bad.

Even when the office has a brand that I know tastes good, this terrible tasting coffee experience still seems to happen.

We wanted to find out why, so we asked some experts to give us their opinions.

Keep reading to learn why bad coffee happens in so many offices.

The Coffee Beans or Coffee Grounds Are Stale

One of the most common reasons as to why your office coffee tastes so bad is because it might be stale.

Many offices buy their coffee in bulk, and that leads to the beans being stashed in a cupboard for weeks or even months on end.

Even before arriving at your office, the probability of them spending weeks in the shop is very likely as well.

And while freshly roasted coffee beans do taste their best after some time, this only holds true for a few weeks.

After that, the window for acquiring the best brew and taste will be closed.

However, this doesn’t mean that your coffee beans have spoiled.

This only means that the compounds as well as the aroma have started oxidizing and evaporating. They are still safe to drink, if you can bear their less than optimal taste.

It may also help if employees air out their concerns about bad office coffee to their HR manager so that they can come up with ways to serve a better alternative.

It’s Been Made Too Long

If you approach an already made pot of coffee in the office that taste bad, then there is likely one simple reason it has a terrible taste.

It’s been sitting in that post for so long that it now tastes awful.

The fact is that a pot of coffee can start to go bad after just 30 minutes.

At this point, the scent will begin to change.

After an hour or two, you can expect the taste to be compromised.

That said, the number one thing you can do to deal with bad office coffee is to drink it right away while it’s fresh.

If that’s not an option, here’s an idea to try – mix a packet of hot chocolate with your coffee.

The chocolate flavor will override a lot of the bad coffee flavors, evening it out and creating a sweet treat.

The Coffee Maker Is Dirty

There are some reasons office coffee tastes bad that are simply out of control.

But here’s a common one you can remedy – the coffee maker is dirty.

Coffee is oily, which can cause build up in the reservoir, under the filter basket where the water comes out, and on the sides of the carafe.

In the office, these components are rarely cleaned.

And most people think that simply rinsing the carafe will do.

So if you want your office coffee to improve, I suggest taking some time after hours to go thoroughly clean the machine every so often.

Scrub and wash the carafe with soap and water.

Wipe out the inside parts of the machine.

And use a solution of half vinegar and water to run through the machine.

Just don’t forget to finish by running some fresh water through.

If you use too few or too many grounds, your coffee will be poured down the drain rather than enjoyed.

Because taste is subjective, it is usual for offices that use a high volume canister of coffee to have very conflicting tasting coffee, as each person will make the coffee to their own preference.

The temperature of the water can also have an impact on how your coffee tastes.

Another reason to avoid storing coffee beans or grounds in the fridge or freezer is that cold grounds will lower the temperature of the water during brewing, affecting the taste of the coffee.

What To Do About Bad Office Coffee

How can people break the cycle of sludge and become more coffee conscious?

It’s not all that hard. It starts with finding an ally.

Chances are there isn’t just one person who thinks your office coffee is bad.

Seek out another person or two and take it from there.

Take turns brewing something that someone else likes.

Let other people see what you’re doing and, for some, their curiosity will get the best of them.

You might meet some new colleagues you never knew you’d had much in common with.

You might even bring your company from an outdated corporate coffee stereotype to something that’ll make Brooklyn baristas tip their eclectic hats.

Another option is to try having your office coffee as an iced coffee.

You will have iced coffee that tastes better than its hot counterpart.

1 thought on “Why Is Office Coffee So Bad?”