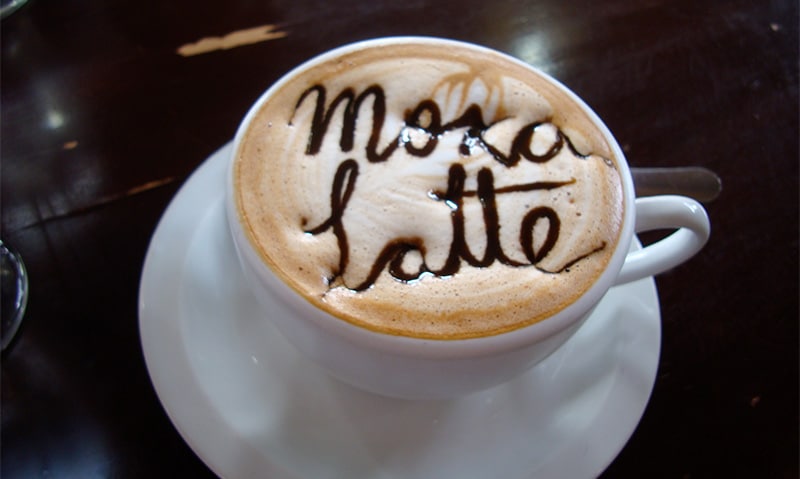 If you’re considering trying a new coffee drink at your local coffeeshop, the mocha may have caught your eye.

But if you’re like me, then you wonder if this is just a fancy hot chocolate or if it has coffee in it.

Yes, a mocha does have coffee in it!

Keep reading to learn more about my favorite coffee drink, the mocha.

What is in a Mocha?

If someone is wondering if mocha has coffee in it, the answer is definite yes.

The reason, is that coffee is required to make a mocha.

At the same time though, giving a greater understanding of what mocha is, is important.

Mocha coffee is a latte, in which chocolate syrup is the main focus for ingredients.

Based on this, there is not much sweetener added to the drink, aside from the syrup itself.

As such, there is a balance in the sweetness.

However, the reason why mocha lattes are liked by many, is because of the types of chocolate syrup that can be added, thus, increasing variety.

While regular chocolate syrup can be used for mochas, there are also much better options, thus, enhancing the richness of the beverage.

One of the reasons why many coffee fans enjoy lattes so much, is because there is enjoyment out of a drink being customizable.

In other words, customization is key here, which makes mocha distinguish itself.

In short, coffee is in a mocha. However, this is only part of the reason for its popularity.

Now, even though mocha is not the same as regular coffee, it still has coffee grinds.

In other words, even though one could argue that mocha is technically a coffee, there are distinct differences between the two.

Regular coffees are made using coffee grinds, milk, or even cream being optional.

Meanwhile, milk is the base necessity for mochas.

The needed ingredients for a mocha are not just ground espresso.

However, milk is what makes a mocha stand out and have a distinct appeal.

More importantly, steamed milk is a requirement for the following reason.

Milk in a mocha causes richness, which aids in distinguishing it from coffee.

Furthermore, the combination of chocolate syrup and milk helps to create a unique experience.

Lastly, it is important to talk about the amount of coffee that is in a mocha.

How Much Coffee is in a Mocha?

Coffee and mocha may not be the same, but coffee is still a product of a mocha.

One of the bases of coffee is caffeine.

Thus, to determine how much coffee is in a mocha, the amount of caffeine in a mocha needs to be looked at.

This highly depends on how a mocha is made and whether the individual making the drink, prioritizes coffee grinds over the milk of the mocha.

Some would say that this is overpowering, while others would argue that they prefer their mocha to taste more like a regular coffee.

At the end of the day, although both the base of a coffee and a mocha have caffeine, they are still different products, since one uses water, and the other uses milk.

How Much Caffeine is in a Mocha?

Now that you know that a mocha does have coffee in it, you may be curious about the caffeine content.

After all, a caffe mocha is made with espresso shots, so you know it will pack a punch.

Your normal caffe mocha is made with two shots of espresso, which means you’re looking at 130mg of caffeine.

Because a single shot of espresso has around 65mg of caffeine, and the mocha has two espresso shots.

Can You Get A Decaf Mocha?

Yes, you can get a decaf mocha!

In the afternoons, I often order a decaf caffe mocha, or mocha latte, my at local coffeeshop.

Of course, keep in mind that even decaf espresso shots still have a tiny amount of caffeine.

Depending on the coffee beans being used by your local coffee shop, a decaf mocha can have anywhere between 6mg of caffeine and 30mg of caffeine.

Even at the high end, that is considerably lower than a regular caffe mocha.

For a frame of reference, the average cup of regular coffee has around 100mg of caffeine.

In closing, the question of whether mocha has coffee in it is a definite yes.

Although mocha and coffee are technically different, mocha cannot be made without some kind of ground espresso, because although milk is a requirement, one can still argue that mocha is a type of coffee.

Of course, this is just the tip of the iceberg, such as how when it comes to a mocha, milk and chocolate syrup are what make it appealing, while water and coffee grinds are what people use to make coffee.