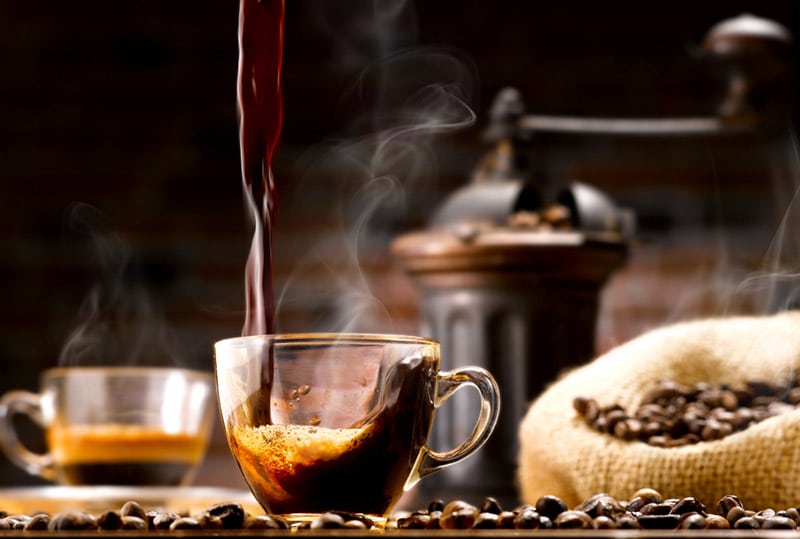 The fact that coffee comes from a plant is no surprise to most people.

In fact, a good amount of marketing emphasizes the coffee bean as the primary source of the drink as well as its heritage in Central and South America.

However, until someone has left a used filter in a coffee machine for too long, the idea that coffee can actually grow mold is a bit of a foreign concept.

Like most foods that are not processed, coffee is organic.

That means it can break down and decompose like most other food types left long enough in air and with moisture present.

So, yes coffee can grow mold.

It’s a primary reason why coffee needs to be kept dry when in storage, whether in bean form or grounds.

Most of the time, this is not a problem; coffee beans tend to be stored and shipped in dry bags.

They are roasted and burned of any contaminants when prepared for grinding.

As long as the coffee grounds are kept dry and away from moisture until actually making the drink, all is good as well.

Contents show
The Basic Ingredients Mold Needs
Where Did the Mold Come From?
Is My Coffee From the Store Contaminated?
How to Quickly Clean a Coffee Brewer From Mold Contamination
Other Issues in Addition to Mold from Leftover Coffee

The key factors that mold needs to latch onto organic material and grow are a comfortable temperature and moisture.

Once spores land on the material, they quickly start going about their business and growing the food or, in this case, coffee.

Coffee grounds are perfect because, while they hold moisture, there is no pool of water.

And, when left in a dark coffee maker, mold has everything it needs to start propagating quickly.

A left over cup of coffee is a bit different.

With a coffee cup full of coffee, the level of moisture tends to evaporate faster than the mold can set in and start growing.

The coffee liquid alone will inhibit mold growth and evaporation will destroy anything the mold can grow on quickly.

On the other hand, if a leftover coffee is left covered up, as in the case of a takeout coffee cup, that could prevent evaporation and give the mold spores enough time to set in and develop a sufficient colony to grow inside the cup.

Where Did the Mold Come From?

Mold spores tend to be present in lots of places and, even in a kitchen, they are brought in by other foods and distributed in the air as the various foods are moved around, used, prepared and consumed.

It’s not uncommon for mold spores to appear on a wet spot that does not dry out quickly, giving the spores enough time to appear in a sizable form.

This is one of the problems with water leaks, particularly those that are underneath appliances, cabinetry, or behind walls.

As long as the mold can continue to access moisture and there is a food source, the fungus can grow to sizable amounts, continuing to generate new spores for greater growth.

It’s the number one reason mold is so hard to get rid of once it gets established in a location.

Mold doesn’t come out of the coffee bean itself.

However, because harvested coffee beans are exposed to so many containers and transferred locations in their travel from the plant to the coffee can and ultimately the consumer’s kitchen, there are probably at least 1,000 possibilities of where mold spores can be picked up and attach themselves to the beans.

For the most part, again, people don’t notice the presence of the spores.

Coffee is kept dry, sealed in air-tight containers, and shipped without moisture.

In this regard, it can take months for mold to develop with the scant amount of moisture in the bean itself.

And, once the bean is roasted, many of the spores are burned off. It’s only in additional storage and packaging facilities that spores are picked up again.

Is My Coffee From the Store Contaminated?

Are there mold spores in the coffee one brews, even when in the form of dry grounds until hot water is added?

The short answer is, yes.

However, the coffee preparation process and the hot brewing kills off so much of the spore levels, what’s left is minimal and poses no harm to health.

In fact, your stomach acids are more than strong enough to kill off anything left in the hot coffee.

Where issues can and usually do occur is when old coffee is left to sit at room temperature.

Then the mold starts to kick in and make a presence known.

Even then, it’s going to take a few days to really become noticeable.

How to Quickly Clean a Coffee Brewer From Mold Contamination

If your coffee brewer does become contaminated, remove all the cleanable parts and run them through the dishwasher on sanitize mode.

If there is no dishwasher, clean them with hot water and soap.

As for your machine itself, assemble everything, fill it up with water only, and brew a full container of hot water without anything else.

The steam and hot water will kill off anything present inside the brewer left behind from simple spore growth.

Then, let everything air dry with the brewer’s lid open for the final step.

Now, your brewer should be good to go and use again without concern.

Other Issues in Addition to Mold from Leftover Coffee

Left to dry, it can actually penetrate and embed itself into mugs, becoming very apparent as stains in white or light colored cups.

A simple wash out after drinking coffee avoids this problem entirely, but once in a while, a leftover cup appears and a science project has established itself inside.

Sometimes it might be better to just throw the cup away with a replacement altogether.