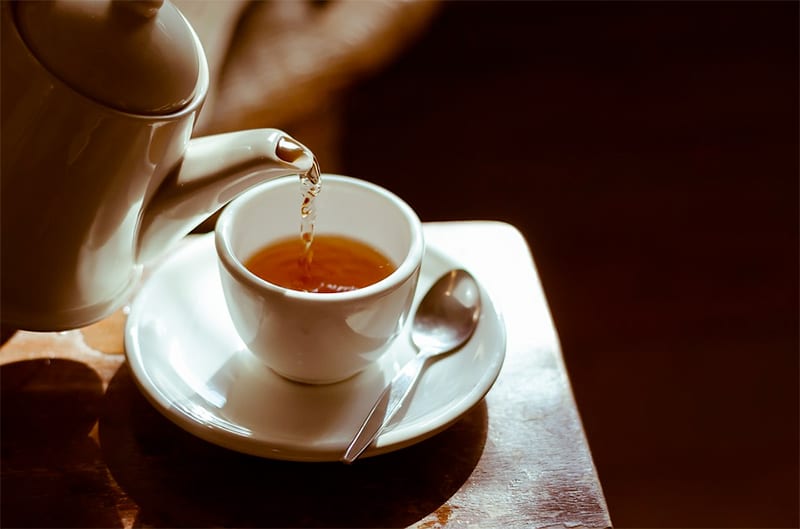 If you’re a fan of bold, exotic teas, then Ceylon tea is well worth trying out. It’s a type of black tea that comes from Sri Lanka, and you’re probably not that familiar with it.

It’s not as popular as Darjeeling black tea, but it has a unique flavor profile that you should check out if you like more robust, full-bodied teas.

The History of Ceylon Tea

Unless you’ve recently brushed up on your South Asian history, you might not know that Sri Lanka was called Ceylon until 1972.

Originally a British colony, the country cultivated tea throughout the twentieth century.

The tea became a household name, and tea drinkers couldn’t get enough of it. In fact, in 1965, the country became the world’s largest exporter of tea.

While the country changed its name, the tea didn’t. It had built up a brand as Ceylon tea, so the name stayed.

To this day, tea remains one of Sri Lanka’s largest exports, and Ceylon tea can still be found around the world.

What is Ceylon tea?

According to the Sri Lanka Tea Board’s website, Ceylon tea actually has a legal definition!

For a tea to be pure Ceylon, it has to be completely grown and manufactured within Sri Lanka, meet standards set forth by the Sri Lanka Tea Board, and consist of only pure Ceylon tea (i.e., the tea cannot be blended with other teas).

The tea is made by withering, rolling, aerating, and drying the leaves. This is similar to how oolong tea is made. Like oolong, Ceylon tea is generally bold and flavorful.

Ceylon tea can be found in black and green varieties. The black is by far the more popular one, and if you’ve ever consumed Ceylon tea, we’re willing to bet it was black.

Black Ceylon tea typically has notes of chocolate and spice. However, depending on where the tea is grown and produced, it may have hints of citrus or even wood.

Ceylon tea is noteworthy for its large amount of variety, and that translates to tasting notes as well.

Green Ceylon can be nuttier and maltier than its black counterpart.

Many sources also list white Ceylon tea as a variety, but the Sri Lanka Tea Board does not list any white varieties, and interestingly, many of the popular “white Ceylon” options do not actually use the specific phrase “Ceylon tea.”

Tea with the phrase “Ceylon tea” must meet the Tea Board requirements and be authentic, so we’re inclined to believe white Ceylon tea is probably blended or inauthentic.

Simply by the virtue of Ceylon tea being a tea, the Sri Lankan brew is naturally good for you. Tea is full of antioxidants and nutrients that have a huge range of benefits.

It can boost your immune system and reduce depression. It’s also been shown to cut the risk of having a stroke by 21%.

These are just a few of the many health benefits that tea has to offer.

In terms of nutrients, tea contains a plethora, including vitamin B1 (thiamin), vitamin B2 (riboflavin), potassium, calcium, and even fluoride.

So drinking Ceylon tea is a delicious way of getting tons of healthy nutrients.

Where to Buy Ceylon Tea

Buying authentic Sri Lankan Ceylon tea can be a bit tricky, so we’ve listed a couple of legitimate options for you to check out.

(Keep in mind that popular brands like Bigelow and Twinings sell impure Ceylon that is either blended or flavored.)

Alwazah Tea bears the official Lion Logo on its boxes and designates the product as official Ceylon tea.

This is one of the few authentic brands we were able to find, and tea drinkers worldwide love Alwazah for the rich taste of its pure Ceylon teas.

If you’re interested in trying Ceylon tea, we highly recommend buying Alwazah to start with. You can purchase a pack of 220 tea bags for about $10.

Stassen Tea is another authentic option, as it also bears the official Lion Logo and designates the tea as “Ceylon tea.”

While it’s not as popular as Alwazah, it’s still worth a look.

Some brands, like Dilmah, use the “Ceylon tea” designation, but their packaging does not include the Lion Logo.

Alwazah and Stassen are two of the only brands who meet both of these criteria, so you know you’ll be getting pure Ceylon tea.