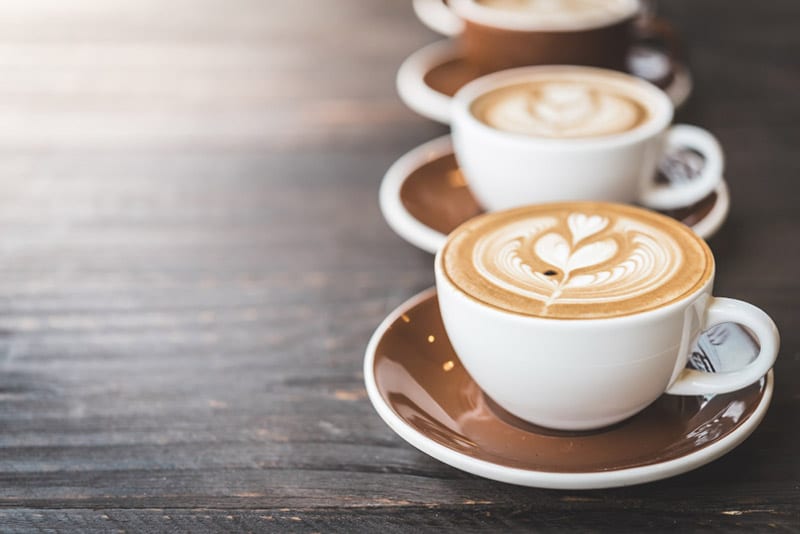 Lattes are a very popular drink with coffee drinkers all around the world.

Lattes have been around for a very long time, but they first started to become served as a standard coffee beverage sometime around the 1950s.

It wasn’t until the 1980s that the drink became very popular, particularly in the Seattle area, and then it finally started to catch on throughout the country in the 1990s.

The popularity of the beverage was even captured/mocked in a funny episode of the 1990s hit comedy, Seinfeld.

Still, some people don’t know all that much about lattes and what makes them so special.

There are a lot of questions out there from people who might enjoy partaking in this coffee beverage if they are just offered a little more information on it.

Thus, we seek to provide some of those answers and to give people a sort of guide to go by when they think about what lattes are and why they are so important.

Everyone has a different level of tolerance for sweetness in their coffee drinks and in their diets in general.

However, the latte should not necessarily be thought of as a sweet coffee beverage.

If you were to compare a latte to a mocha, then you wouldn’t say that it was very sweet at all.

A mocha has chocolate in it, and that promotes the sweet notes that it gives off.

Meanwhile, a latte doesn’t have any chocolate in it, so it is closer to the taste of plain black coffee than some other drinks.

Lattes are made from three simple ingredients:

You can choose to add a few other things to it if you would like such as cinnamon or nutmeg, but the standard latte has just those three ingredients in it.

This is also part of the reason why some people choose to add sugar to their latte.

If one does that, then it is fair to say that the latte does become somewhat sweeter.

However, this is all because the individual has decided to add sugar to their drink.

It is not naturally sweet all on its own.

Again, that comes down to a personal choice, and not everyone will do this.

A coffee shop certainly should not add sugar to your latte unless you specifically ask them to do so.

They will avoid it because some people cannot have sugar in their drinks.

If you taste your latte and it is not sweet enough for you, then you can always add some sugar to it on your own behalf.

Are Lattes Meant To Taste Bitter?

There is no rulebook that says that a certain beverage must taste a certain way in order to qualify as being that beverage.

Some people are purists about their coffee beverages, and they may suggest that something is not really coffee if it has a sweet taste to it.

Of course, this is nonsense, but people try to pass this off as common wisdom all the time.

Those who are so insistent that something must taste a certain way in order for it to “count” as coffee are actually behind the times as far as the coffee world is concerned.

New coffee beverages are bringing people into the world of this delicious caffeinated beverage all the time, and those who work in coffee feel that this is a good thing.

They are happy to sell people coffee beverages no matter what the specific beverage happens to taste like.

If someone wants something that is a little less bitter so they can enjoy it a little more, then what is so wrong with that?

People are going to come up with reasons to complain about almost anything all the time, but it is best to ignore that and just enjoy the drinks that you want to enjoy.

If you think that a latte tastes great, then that is all the more information that you really need to provide.

If someone disagrees or thinks that it is not really coffee, then that is their own problem.

Lattes are increasingly available all over the country.

In fact, it would be surprising to hear about a coffee shop that was not serving this type of beverage to its customers.

Lattes practically sell themselves once you have tried them, so plenty of coffee shops put them up as a featured item on their menu boards.

There are specials that run on lattes from time to time, so you should be sure to check that out as well.

You might just find that there is something to be said about trying this beverage if you haven’t already.

If you can find it while it is on special, then this is even better.

Some people switch their favorite coffee beverage over to a latte once they have had the opportunity to give it a try.

There is no reason to think that you have to stick with plain black coffee for the rest of your life.

In conclusion, if you are the type of person who has to have a sweet taste to any kind of coffee drink that you sip on, then a latte may not be the first choice you make.

You could still enjoy it if you add some sugar to it, but if you are accustomed to much sweeter drinks, then this one still may not hit just right with you.

However, those who are used to the somewhat more bitter taste of coffee but don’t mind having it spruced up a bit may enjoy a latte from time to time.

After all, it is all about finding that perfect combination that you learn to love each morning.

Everyone has different choices in this area, so just make sure whatever you decide on is right for you. There are no wrong answers.